I feel like a fraud writing couture sewing - do real couture seamstress consider using the serger instead of binding seams? Or think that silk organza is a scratchy itchy seam binding? Or use plastic boning stitched into seams?!

Anyway, I started fitting and sewing the first practise run of the bridesmaid dresses. I'm using Simplicity 4070, its the only pattern I have with a lace overlay which means I don't need to draft anything.

I'm pretty much following the instructions out of the Bridal Couture book so cut everything with big wide seam allowances and marked the stitching lines with wax tracing paper.

I underlined the georgette with muslin which gave it a bit of body and let me catch stitch down the seam allowances. I wanted to add in boning and had a big roll of rigeline in my shelf - I used two strips on either side of each seam except for the very front seams where I only used one. Its smoothed out the bodice nicely. I left it too late to add channels so just stitched it into the seam allowances before they were catch stitched down. 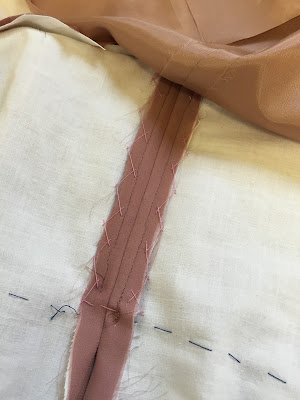 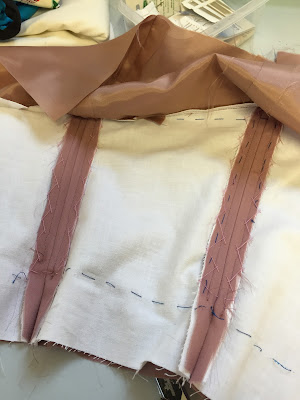 It did originally make the bust seam sit out a bit too far but I found this awesome post on pattern review and went back and unpicked the boning and eased it in and now its sitting perfectly.

I planned on using silk organza to underline the lace but since this lace is fairly stable I didn't need to. This is my second version of the lace - the first I tried using silk organza to bind the seams but didn't like the look or feel so French seamed the lace and then made my own bias binding to finish the neck and armhole seams

Notes to self;
I eased in stay tape to the front top of the bodice but next time I need to be a bit more aggressive with the easing
Either add more boning or interface the underlining - Its not quite stiff enough.
Starch the hell out of the georgette!
Remove all the thread basting - yes it gets hidden but it just looks messy
Iron the rigeline flat first - its bowing the side seams out.

I've just pinned the skirt on here - I want to change the pleats to gathers (I figure it will be more flattering to C's pregnant belly). 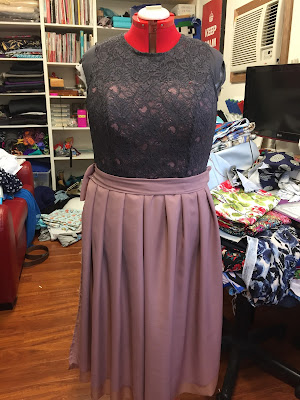 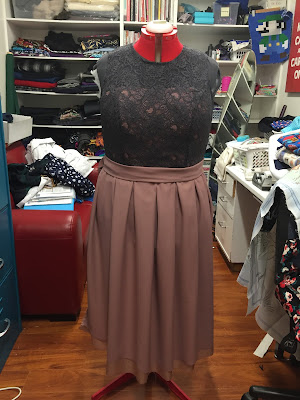 I'm hoping to get the skirt finished and insert the zipper this weekend.
Posted by Suzy at 9:25 AM