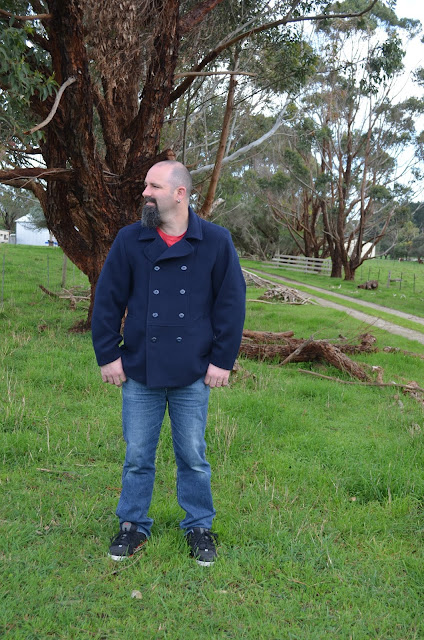 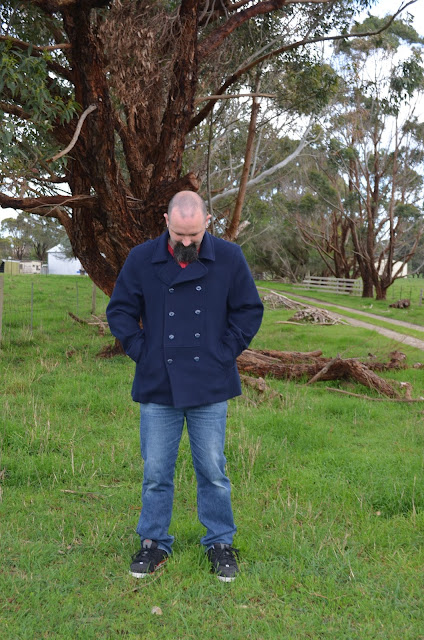 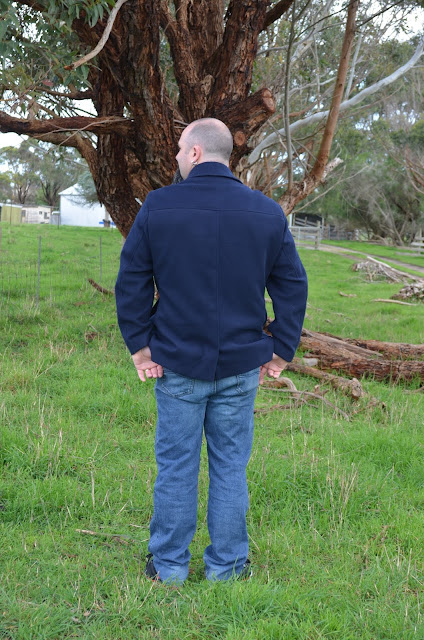 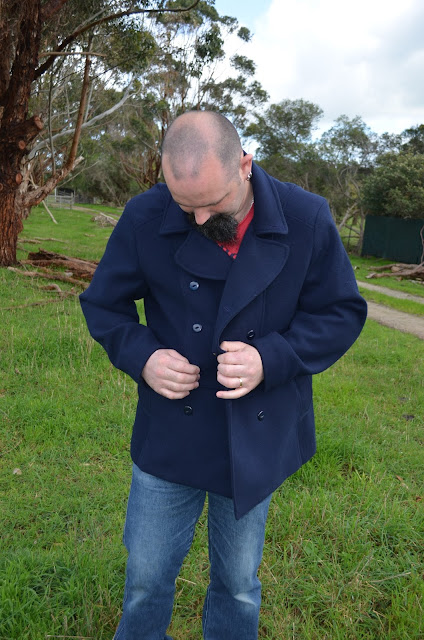 I've never sewn for my husband, he's very much a jeans and t-shirts man. However he doesn't have any coats and when I saw the new Vogue patterns I scooped this one up. It's a nice simple peacoat with some cool details. 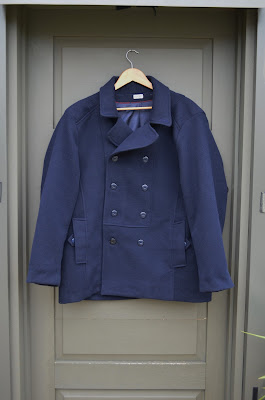 The fabric is a navy coating I picked up from Spotlight on clearance. It's very soft and sewed up beautifully, the colour is true in the top 4 photos (the detail pics are a bit washed out looking). Lining is Sunsilky from Lincraft and the buttons were from there too. 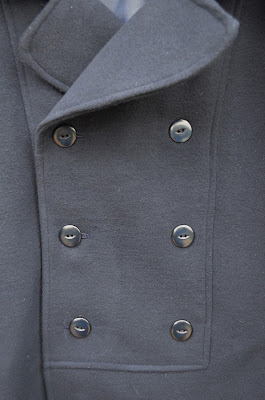 I followed the instructions all the way through (for once!), they are very similar to the RTW sewalong with interfacing on the front, side, back yoke, collars and facings. The lining is semi-bagged with the hems being hand sewn. I actually enjoyed the control this gave me over how well it all fit together. It has inseam pockets at the front and a welt pocket inside. 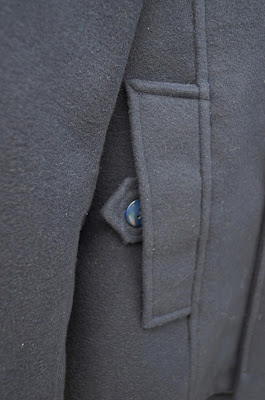 I'm still disappointed in the inside welt pocket. I managed to sew the welts on the wrong way around and had already cut the slit in the facing before I realised.......plus I didn't have enough fabric to recut the front facing and of course Spotlight had sold out of it. So it was carefully unpicked and resewn but you can see some pulling in the lining and its a bit uneven so I'm still not showing any close ups, lets look at the nice notched collar instead! 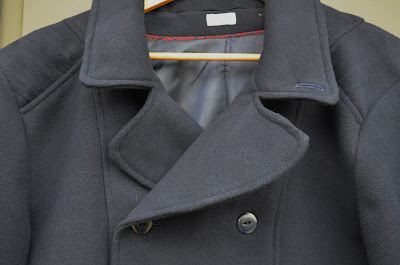 Fit wise I cut a sz42 which matched his measurements. I muslined it up and had to add width in the arms and the upper back. I remuslined all the changes and then cut the main fabric. Once it was sewn up I got him to try it on and it was massive so it was all unpicked and recut smaller. The final product is a sz 42 with a 2" broad back adjustment and a 2" bicep width adjustment. The chest and length are all straight from the pattern and fit him fine (he's 5'11"). If/when I make it again I'll be adding a little to the forearms and to the pocket opening width (I always tell him he has bear paws not hands so the pocket openings are a bit too small) 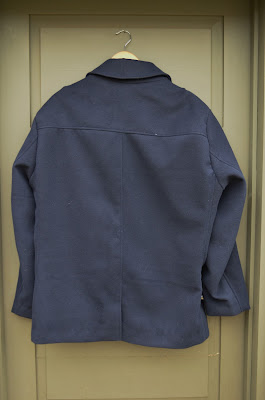 Each time I do a decent size broad back measurement I usually gather the back shoulder seam and ease it into the front, this tends to make the upper back creep forward at the back of the arms. Because this jacket also has a dropped front shoulder seam it seemed to exaggerate this so I put in a topstitched pleat instead of the gathers which made it sit a lot nicer (pleated is on the left, gathered is on the right) 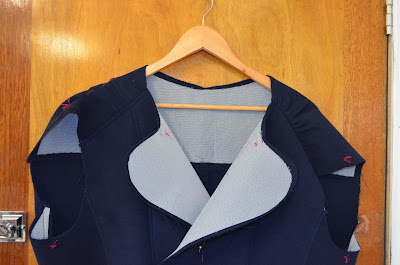 I did flat piping around the facings. I'd been given a big bag of my hubbies late Grandfathers ties so I used one of them to make bias strips out of for the piping. This worked really well and there was enough fabric in the tie to make the piping and the welts for the inside pocket. 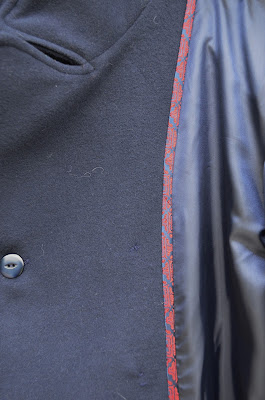 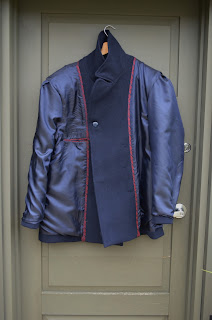 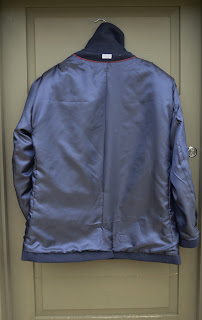 I did notice the pattern asks you to cut 2 inside pocket lining pieces but you only need one (only mistake I found in the pattern).

All in all, I'm really happy with it. I wanted it to look casual but neat and I think it does, best of all it fits him and he likes it!
Posted by Suzy at 11:17 AM 19 comments: 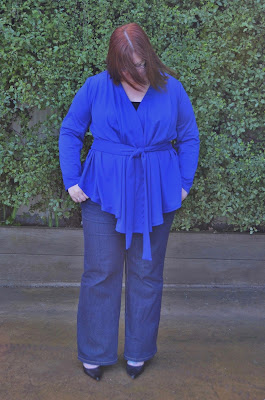 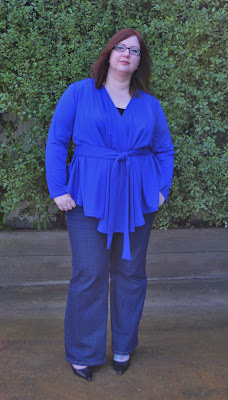 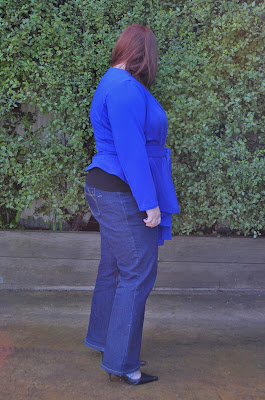 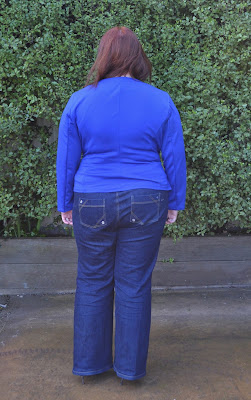 After the wadder that was Vogue 1364 I downloaded this pattern to give it a go. It has all the things that I've learnt to look for in a knit jacket pattern, cut high at the back and with a waist tie to give some definition.
I used the rest of the blue ponte I picked up at the last Lincraft sale. Its a medium weight ponte that doesn't wear too badly, I stock up on it and the knit interfacing when the big 50% off sale is on each year. 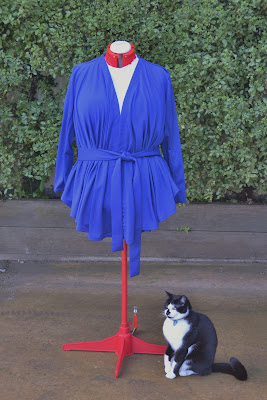 I made a 1" FBA which was rotated into the front folds and a 1" arm width adjustment. I'm really happy with how it fits, Lekala has been a little hit and miss for me but I sent off my exact measurements for this one and its spot on. I've had trouble in the past because they go off the full bust not the high bust which is a problem if you normally have to do a FBA because the shoulders end up too wide and the armscye is the wrong angle. But I think maybe because this pattern is so close fitting (its got either none or slightly negative ease) the shoulders fit perfectly and I needed to do a FBA anyway. 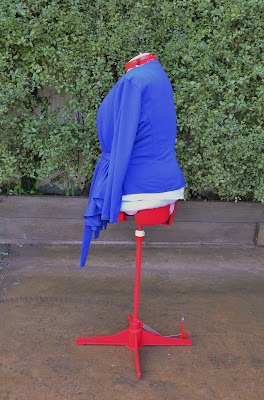 The sleeves are a two piece sleeve which fit really well. I have found the ties pull the side seams forward and pull at the back a bit too but its not a major deal. The ties and front facing are interfaced and I'm not sure I'd bother interfacing the ties if I made it again.
I should mention I got this pattern from the new English site. Its a lot easier to navigate and download from than the original Russian site. The patterns don't come standard with seam allowances but you can click to have them added at checkout.
Posted by Suzy at 9:25 PM 8 comments: 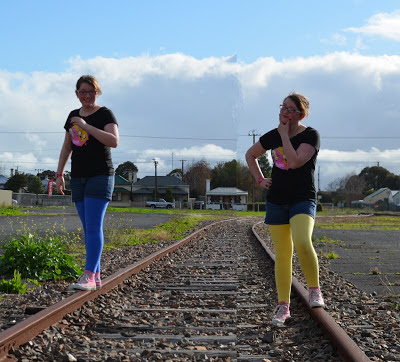 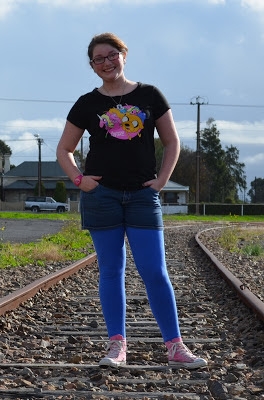 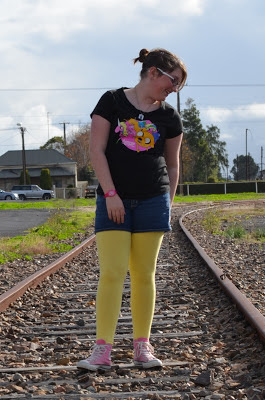 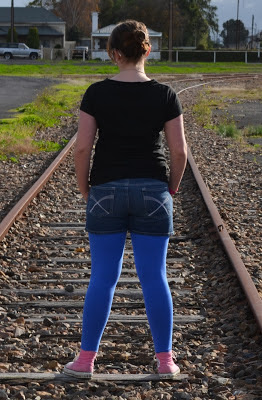 I was lucky enough to get to pattern test these leggings! Because I would have had to grade them up a couple of sizes for me I thought I would make a pair for the daughter first.

I got this really nice blue cotton/spandex from Spotlight on clearance last week and the yellow is a thin knit from the Alannah Hill outlet in Melbourne. 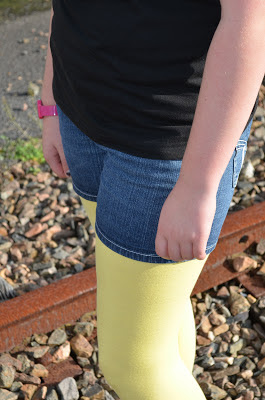 She fell inbetween two sizes, the Small and the Medium so I cut a Medium (always easier to take in than try to let out). I like that the seam allowances are 5/8", I always forget with smaller seams and sew them at 5/8" anyway! I had to scoop out the front crotch by a tiny amount (about 1/4") and even though I cut the petite length I also cut another 2" off (She's only 5'2" tall) otherwise the fit is straight out of the envelope. I am yet to see RTW fit her as well, as you can see with her shorts she always has excess at the front so for these to fit so well with virtually no adjustments is amazing! 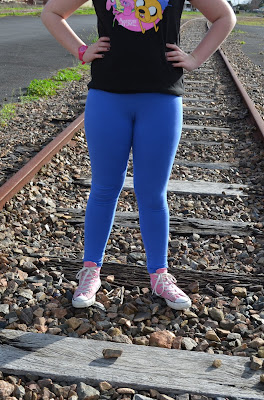 Very easy construction, I did a stretch stitch on my sewing machine then overlocked the edges. The waistband has the elastic threaded through then zig zagged down to stop it twisting, its something I always do but its the first time I've seen it included in a pattern!

Not much more to say other than its a nice pattern and I'm on the lookout now for good material to make more. She loves them even if I did have to bribe her with a slushy to let me take the photos! 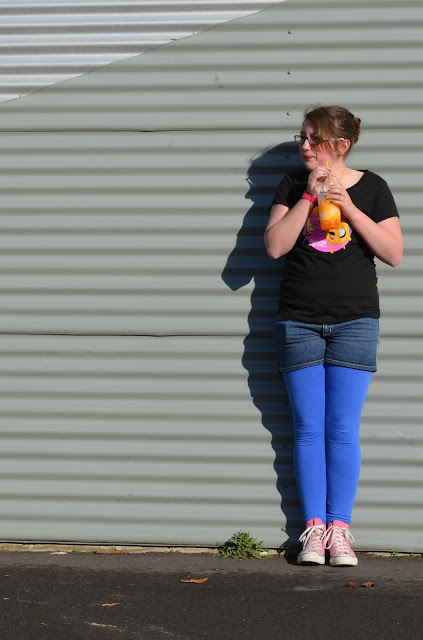